My apologies for my lack of productivity in blog-land!  In all fairness, I’ve been working quite a lot lately between my two jobs (one contract is finishing at the end of November though – phew!).  We also bought a new (to us) car – a 2007 Honda Fit and sold my old car (a 1996 Honda Accord ; man I love them Hondas).  The Fit is a standard (aka manual transmission), so I’ve been busy in the evenings learning to drive it.  It took a few weeks, and a lot of tears, but I’m now zipping around Squamish in my new wheels!  I’m still not super confident, and it will probably be awhile before I take it into Vancouver, but that will come I’m sure.  Learning to drive a standard was one of my goals for 2011, so I can now tick that off my list – Yippee! 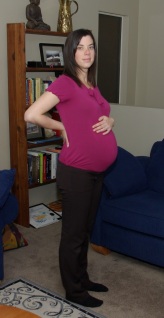 On the sewing/crafty front, I’ve mostly just been tacking a few UFO’s and converting some self-made pants into Maternity Pants.  I made some knock-off True Religion jeans last year that I lovingly named the False Religion jeans – ha!  Anyways, the fly started doing some weird things and stitching was coming out of the waistband.  So I hadn’t worn them in awhile.  These were some of the first pants I’d made so there are a few things wrong with them, I figured I’d convert them into maternity jeans and get some more wear out of them.  I used Megan Nielsen’s tutorial (again, since I’m carrying so low this seems to give me the best fit) and voila!  Super nice maternity jeans!  I also converted some brown pants that I made using the Built By Wendy Sew U book that I just never seemed to wear.  I don’t know why; I felt the crotch and waistband were kind of weird-looking on me.  But they make fantastic maternity pants!

My next sewing projects include a maternity winter jacket (boy is it ever getting chilly!), a nice blouse and some dressy tops, and maybe a couple of maternity dresses.  I’ve been scoping out ASOS for inspiration because they have some really nice maternity clothes.
I want to make a lace dress/tunic like this one for the holidays:

I love the bib front on this blouse:

This wrap top looks so comfy!

This blouse shape is nice for work, although I don’t think I want a sheer version:

And I like this coat, I wonder if it would work in a waterproof fabric:

I already started making a military-inspired (non-maternity) jacket using the Built By Wendy Coats and Jackets book, so I will finish that up before starting on a maternity version.  I think a cape would also work nicely for El Bumpo, but I’m not sure how practical it will be for the cold, wet and windy winter that’s coming to Squamish…